Are you tired of seeing “business as usual” in supply chain management? Have you ever felt as if implementing your changes was like trying to steer an air craft carrier — in the Arctic?

I know the feeling. And my message is this: Don’t give up. The industry needs your decisive leadership.

Early in my career, I was head of inventory control for a large retail operation that ran as a co-op. At the end of each year, all profits were distributed to the member stores — so on January 1, we had zero in the bank at the corporate level. 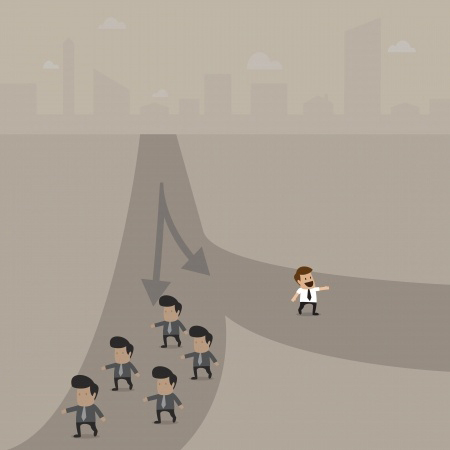 That meant we relied on a huge credit line as we started doing our buying for the year. And buy we did: Within a couple months, our warehouses were bulging. We stocked up early because we knew that in May, people would come in and start ordering their supplies for winter.

But then every spring, like clockwork, I’d get called into our chairman’s office. By that point, we’d be into our credit line for $300-400 million, so the chairman would command, “Stop buying!”

“No, STOP BUYING!” And that was that. We’d stop buying.

I probably don't need to tell you what happened a month or two later: we ran out of stock for our core items. The chairman knew we couldn’t do business like that, so he’d call me back in and say, “Start buying! Start buying!”

I was young and relatively “junior” in the company, so I put up with this for several years. Finally, I snapped.

When You're Right, You're Right
One day, I stormed into the chairman’s office and said, “Enough of this! If you’d just butt out and let us run purchasing the way we’re supposed to, we’d have all the inventory we need and we wouldn’t have to keep buying Christmas trees in February!”

The chairman stared at me for a while. And then he finally asked, “Well, what are you suggesting?”

I calmed down a bit and told him exactly what changes I had in mind. Much to my surprise, he gave me free rein to do what I proposed, and he even told other managers that when Harrison came into their office, they were to put themselves at my service.

Of course, the chairman only gave me three weeks to do it all. But at least I finally had a chance to right the ship.

We did our first ABC analysis. And then I went to our planners — we had 53 of them — and gave them specific instructions about how I wanted them to work with our department managers to get aging stock out of inventory while also preventing shortages.

When I got called back into the chairman’s office three weeks later, we went over the results: We had already cut inventory by 10 percent, and our sales had gone up 5 percent.

Look, I’m not saying these results will be typical. And I’m certainly not suggesting you should speak to your boss as confrontationally as I did.

My point is this: Sometimes you have to shake things up. When you’re right, you’re right. And if you really are right, nothing is going to get better without you getting your way, because your way is the best way.

In my next post, I’ll describe the emerging business approach that I believe best equips you to tackle the business challenges of today — and tomorrow.

Bill Harrison, President of Demand Management, Inc., began his career in supply chain operations over 25 years ago on the loading dock of a True Value warehouse. He spent over 17 years with True Value Company, where he held a number of management positions, and personally designed and implemented a market-leading Replenishment Optimization System. He also has served as COO of Atrion/ClearCross, and held leadership positions at Manugistics and American Software before joining DMI in 2006.

Best-of-Breed or ERP: What’s Your Pick for Supply Chain Planning?

What Is Demand Planning? Basics of Projecting Future Demand

Five Things You Can Do This Week to Reduce Inventory: Part II