I love the Winter Olympics. Always have, always will.

The first Winter Olympics I can really remember clearly was Lake Placid. Though I was only a little boy in 1980 who had just learned to ice skate, it’s amazing how many of the events from those Games I remember with clarity.

Now, the 2014 Sochi Games were surrounded by turmoil and controversy, but none of the pageantry was lost for me. None of the magic dimmed. And even in this age of cynicism and anti-American sentiment, nothing could have prevented that Olympic flame from igniting my national pride.

Now that the Games are over, all flags raised and anthems played, it’s even more clear to me what we Americans should be proud of—even though we didn’t win the most events or take home the most medals.
There were 12 new Olympic events in Sochi, and the U.S. medaled in more of them than any other country. In these 12 events, we won eleven medals. Six of them were gold. The runner-up country (Canada) took away five medals, and no other country had more than two gold medals in the 12 new events. This means more than half of the U.S.’s nine gold medals from the Winter Olympics came from new events! 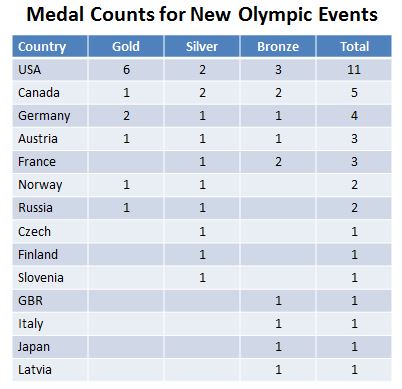 What’s the lesson here? The one thing the U.S. does better than anything else is innovate. I don’t know why, and frankly, I don’t care. It’s a fact, and it’s a wonderful thing to celebrate. Innovators are doers. They don’t stand around contemplating “how come” when they could be breaking trail. New frontiers aren’t limited in number. If you’re an innovator, there’s a new one every day.

You can probably see where I’m going with this. What I’ve written so far has everything to do with Integrated Business Planning software solutions. In May 2012, Demand Solutions president Bill Harrison and I were standing underneath the Space Shuttle Discovery at the Smithsonian Air and Space Museum in Virginia where we were holding our annual user conference. We were both awestruck by the community spirit of innovation that those types of engineering marvels represent. No matter what you do, you too can turn the wheels of progress by simply adopting the mindset of medalists, spacewalkers, and other change-makers.

At Demand Solutions we’re sort of quiet about what we’re up to in R&D – but there’s an awful lot to get excited about. In previous posts we’ve told you about what we’re doing with Azure up in the Cloud. The power of our toolset is now unlocked for mobile applications. We’ve introduced predictive lead time capabilities that make vendor performance analysis a discipline instead of a guessing game. We’ve incorporated genetic algorithms into our efficiency and productivity capabilities. The nature of communicating even in supply chain is changing to an always-on culture that’s now a click away from any Demand Solutions view.

These are small things in the grand scheme of global change. They won’t get you to Mars or win you a gold medal. But we think they all come from the same place, and will make an important contribution to keeping that big wheel turning. We all do our part. This is ours.

Noah Sferra learned to skate in his ice hockey obsessed hometown on Lake Mahopac, one hour north of New York City in the Hudson Valley.  He counts skiing and bobsledding among the other winter sports he’s tried his hand at.  His career literally started in the back room of the technology department at Standard & Poor’s behind an unmarked door.   He comes to the Supply Chain disciplines from a more transactional focus conceptualizing and implementing ERP and CRM solutions. He’s enjoying the start of his sixth year with Demand Solutions and his role as  Director of Strategy & Growth for the Northeast Region.  If you liked what you just read, he’d like to personally invite you to follow his semi-regular supply chain observations and commentary on LinkedIn & Twitter.

What Is a Product Development Strategy

The Gartner Magic Quadrant: Why Should We Care About This Research?